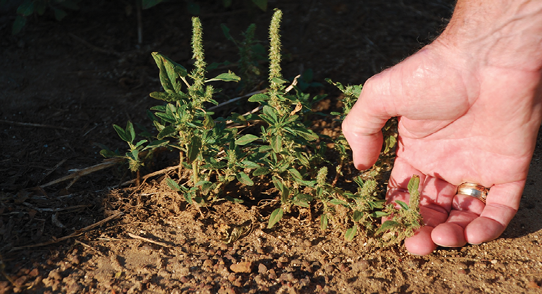 By John Dobberstein posted on January 1, 2013 | Posted in Crop Protection

This adaptive, noxious weed thrives in no-till fields, and preventing its spread will require proactive scouting and herbicide applications.

Palmer Amaranth, the so-called “pigweed on steroids” that has plagued Southern cotton and soybean farmers for several years, is marching northward and could soon threaten yields and profitability for Corn Belt no-tillers.

This aggressive weed will likely thrive in no-till fields, and timely scouting and herbicide applications will be crucial to stopping it, Midwestern weed scientists say. Since 2010, infestations and hot spots have already been confirmed in Indiana, Michigan, Illinois, Wisconsin and Ohio.

According to weed experts, two weeds per 20 row feet can reduce soybean yields by at least 23%. One plant per square meter can reduce corn yields by 33%.

“Judging by how well Palmer amaranth has done in Michigan, I believe it will be the No. 1 weed in the Midwest in 5 years or so,” says University of Tennessee weed scientist Larry Steckel.

Tale Of The Tape

Palmer amaranth is a dioecious species, meaning plants are either male or female, introducing a great deal of genetic diversity. 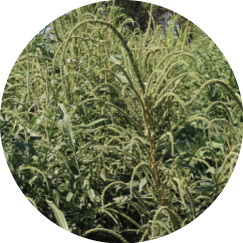 Palmer amaranth can also tolerate high temperatures and dry soil conditions better than any other Amaranthus species. The weed can grow 2 to 3 inches a day in summer heat and reach heights greater than 7 feet, with individual female plants having the ability to release in excess of 400,000 seeds per plant…

The Threat Of Herbicide Resistant Weeds Is A Critical Concern

The Threat Of Herbicide Resistant Weeds Is A Critical Concern