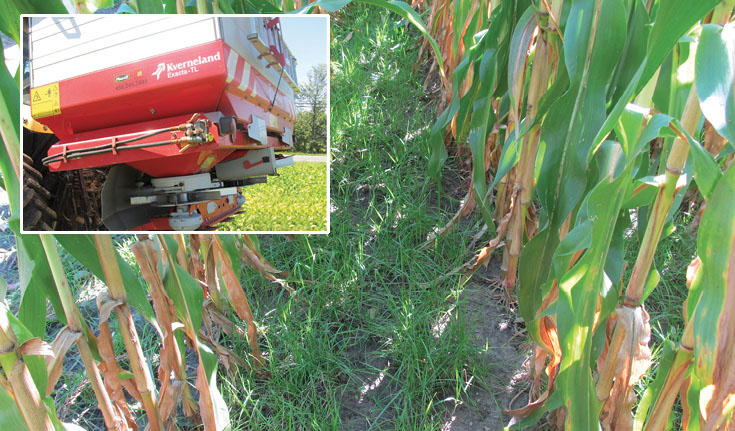 Ryegrass Seeded Early Into Corn May Be A Cool Climate Tool

Farmers in the province of Quebec seeding annual ryegrass into standing corn at the four- to nine-leaf stage find no yield drag with corn and a yield bump for soybeans.

For growers in the province of Quebec, getting annual ryegrass seeded early enough to establish and provide cover-crop benefits is a challenge due to the short growing season.

Some farmers have tried with mixed success seeding annual ryegrass into mature standing corn with highboy seeders or with aerial seeding.

But dozens of Quebec farmers are working with another method: broadcasting annual ryegrass into standing corn at the 4- to 9-leaf stage. Shade from the corn plants keeps the annual ryegrass from growing too aggressively until after harvest.

In the U.S., having annual ryegrass emerge while corn is growing might void a farmer’s crop-insurance provisions. But for no-tillers in the northern Corn Belt unencumbered by insurance rules, the Quebec project might offer some solutions for cover-crop establishment.

Quebec agronomist Daniel Briere has been working for several years with farmers in Quebec interested in seeding annual ryegrass to increase air in the soil, reduce compaction and increase corn and soybean yields.

In Briere’s area, there hasn’t been enough time for the ryegrass to become well established, even when aerially seeded or applied with a highboy seeder.

Briere says dozens of farmers in the province use the early-seeding system with ryegrass, typically starting on 80 acres and expanding the practice as they get comfortable with it. The establishment rate is 80%.

“In 4 years of research, we’ve seen no significant yield difference with corn in the first year, and we’ve seen up to a 9-bushel increase in soybean yields afterwards,” Briere…