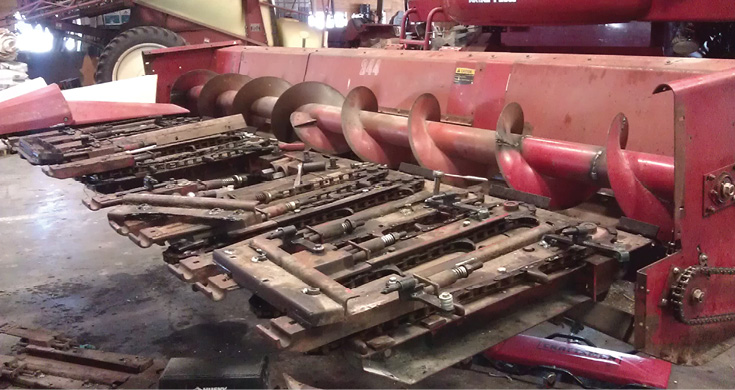 When no-tiller Ross Bishop wanted to speed up harvest and found his corn head was holding him back, he faced a tough choice: Purchase a brand-new header or build one himself. He chose the latter.

Bishop no-tills corn, soybeans, wheat and cover crops on his 600-plus acre farm near Jackson, Wis. Until last year’s drought, he was averaging 150 bushels of corn at a harvesting rate of 4 mph.

While that kind of production is successful for his area, he wants to take his harvest performance up another notch.

Last spring, he converted three old 38-inch, four-row corn heads into a 20-inch, four-row head using International parts. He’s been farming in 20-inch rows since 1997, but had grown dissatisfied with the snapping rollers on his previous John Deere corn head.

The problem, Bishop says, was how the rollers intertwined.

“It’s like a wall or mixer,” he says. “Once I get to 4 mph with the combine — and it can go a lot faster because of its capacity — the head won’t take in the material because it’s a bottleneck.”

Speeding up would only push down on the stalk and cause ear losses. With the new head, Bishop’s goal is to get the combine up to 5 mph or faster without sacrificing production.

To build the new header, Bishop repurposed parts he bought for “little to nothing.”