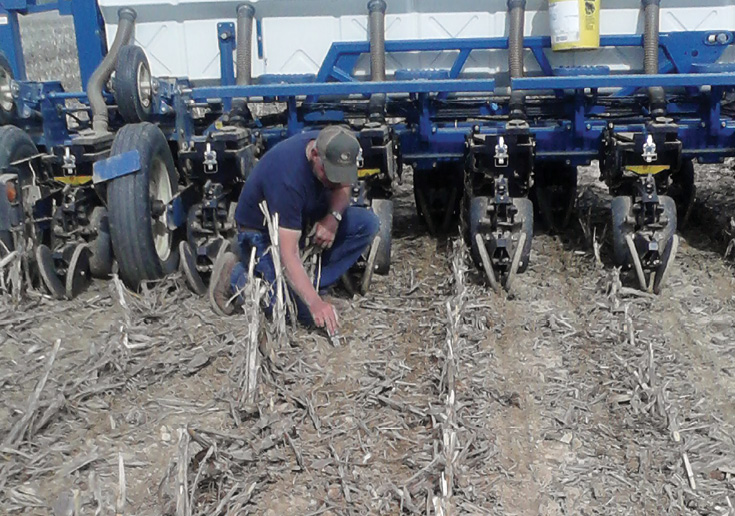 “I don’t think I can put a dollar amount on what it’s done for me, but it’s certainly paid for itself,” Denton says. “I don’t touch my stalks after harvest, and I bought RTK with the goal of being able to manage residue.”

Denton no-tills soybeans after corn on about 3,300 acres in Cardington, Ohio, and has struggled with planting soybeans into corn residue. He plants most of his soybeans in 15-inch rows with a Kinze planter and also does some seeding with a 30-foot John Deere drill on 7½-inch spacing.

For years, he planted corn with a 16-row planter, but moved last spring to a 24-row Kinze planter. But whenever Denton would plant into the old stalks with his 15-inch soybean planter, he would lose seed-to-soil contact and not get as good of a stand.

“We tried planting at an angle so we weren’t running down a row, but it still happened every time we crossed the row, which made it a pain to harvest,” Denton says. “I like to see nice, straight rows for harvesting and planting. I tried to drive so I wasn’t on a row, but doing that all day long is really stressful.”

After having little success applying nitrogen and other products…