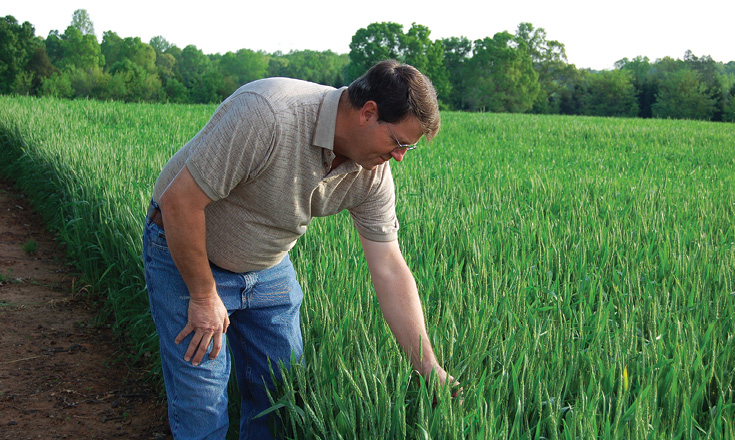 With a crop rotation that increases profitability, feed-company salesman Jimmy Howard can still afford to no-till corn, soybeans and wheat on 450 acres outside of his full-time job.

If it weren't for no-till, Jimmy Howard wouldn’t be able to squeeze in a full-time sales career with farming.

The Mooresville, N.C., farmer and feed-company salesman started no-tilling when he took over his father’s cattle, poultry and hay farm 20 years ago. He chose no-till after attending a meeting in Piedmont, N.C., that was promoting it in the early 1990s.

Because he’s farming after hours, on weekends and days off, Howard must make the most of his time and farm ground. No-till and double-cropping are helping him achieve that.

“We have a longer growing season. As long as we get the soybeans planted before July 1, they mature by early frost and we can get that extra crop in there,” Howard says.

Howard harvests wheat during the first half of June and no-tills soybeans as soon as he can so fields don’t dry out. He saves a trip in the field by skipping a burndown before planting and makes one herbicide application afterwards.

He normally plants Group 5 soybeans, explaining that Groups 3 and 4 have the potential for higher yields, but also a higher risk due to high humidity. In recent years, he’s planted some late Group 4 beans — around 4.9…

Double Up No-Till Benefits By Cover Cropping For Forage