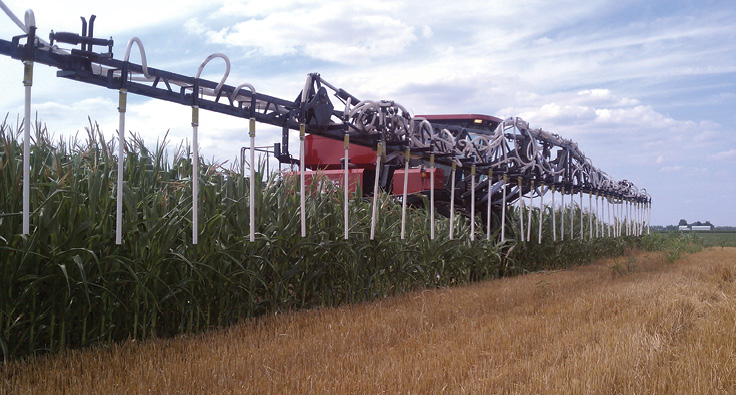 While drilling is one of the best ways to seed and establish cover crops, it sometimes means waiting too long to seed corn and soybean acres.

So Celina, Ohio, strip-tiller and no-tiller Matt VanTilburg relies on a custom-built, high-clearance seeder — the farm’s second “Kover Kroper” machine that was built and deployed in 2011.

The first machine, rigged up in 2010 on a high-clearance sprayer, had five spinners on a 90-foot boom. It was easy to set up and it did the job, but it took too much time to calibrate each spinner, says VanTilburg, who owns and operates VanTilburg Farms with his two brothers.

For the 2011 cover-crop seeding season, the farm made another high clearance seeder that’s more precise, efficient and versatile. This Kover Kroper consists of a Walker sprayer they bought from the company and customized.

A local welding shop made the stainless-steel tank to hold product. Depending on what the Kover Kroper applies — cover-crop seed, winter wheat or urea — it can hold about 3,000 pounds of product.

VanTilburg Farms installed a scale so the operator knows exactly how much the tank holds, and the machine has a DICKEY-john rate controller to set and to change the amount of seed, wheat or urea being applied.

RTK Bonus. The Kover Kroper uses RTK, which the farm employs for planting, spraying, strip-tilling and harvesting. They use RTK to build strips in the fall into annual ryegrass and plant corn into the tilled strip in the spring.