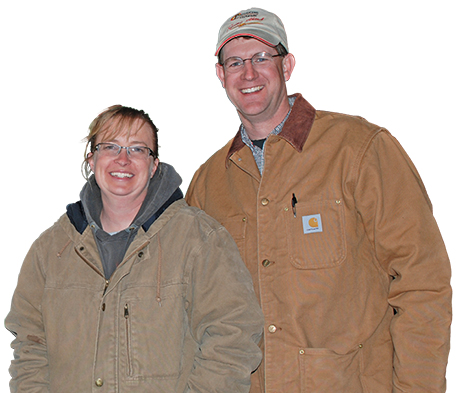 Continuous no-till is an uncommon practice in southeast Kansas, where tight clay soils can hinder nutrient distribution and the growing environment causes rapid breakdown of residue.

But since 1998, Neodesha, Kan., farmers Randy and Nicole Small have focused on the challenges and reaped the benefits of no-till.

“You have to be motivated to make it work — it doesn’t just happen,” says Randy, who with his wife was honored in 2009 with the DuPont Young Leader Award for Kansas. “The biggest hurdle is our high humidity and high moisture. We have a hard time keeping residue and we really need it to make no-till function well.”

Average annual precipitation for the area is about 42 inches, but timeliness of rainfall during the growing season is frequently an issue, especially since summers are usually hot and dry and a tough clay pan limits moisture-holding capacity.

There’s a saying area farmers are fond of quoting — “We’re never more than 10 days from a drought or 2 hours from a flood.”

“In a continuous no-till system, I think we can extend that 10-day period by a week or so,” Randy says. “The keys are building soil structure, so roots can get down into that clay where the moisture is, and protecting the soil surface.”

Soybeans are an important cropping component for the Smalls, who have also grown corn and hard red winter wheat and raised cattle. The problem with soybeans, however, is the relatively sparse post-harvest residue.