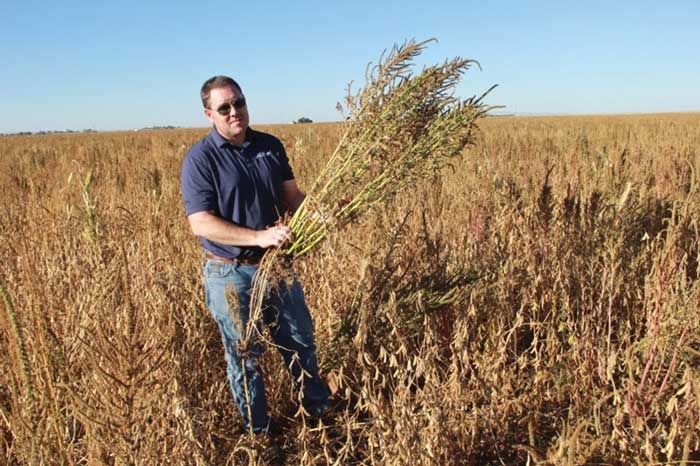 By Michaela Paukner posted on November 29, 2022 | Posted in Crop Protection

After years of hot and dry weather in Imperial, Neb., and other parts of the Plains, a “tsunami of weed pressure” is poised to strike dryland no-tillers in the water-deprived region

“The drought started in May 2021, and it’s just been a real challenge ever since,” says Ben Sauder, vice president of agronomy for Frenchman Valley Coop. “Guys are spending hundreds of dollars an acre on chemicals, and it’s not doing anything. We had some weeds germinating where we had hail this year. We had Palmer amaranth germinating in August. It’s just been a nightmare.”

Western Nebraska and the Plains lost the battle to weeds in 2022, meaning the weed pressure continued to build as the millions of out-of-control weeds made millions of seeds.

“Another dry year is just going to compound the problem,” Sauder says. “We’re going to have to really work hard in the next several years to get these weeds back under control because we’ve lost 20 years of weed control in just this past year.”

Pigweed and Palmer amaranth are two of the most troublesome weeds for no-tillers in the region, and the ongoing drought is adding to the existing challenges with controlling these weeds. Parts of western Nebraska only received about 5.5 inches of precipitation from January to November 2022 — marking the driest year in 130 years of record-keeping, according to Sauder.

“We need some rain to keep things activated and create some desirable conditions for both crops and weeds,” Sauder says…

How the Enlist System Impacts No-Tillers and Weed Resistance