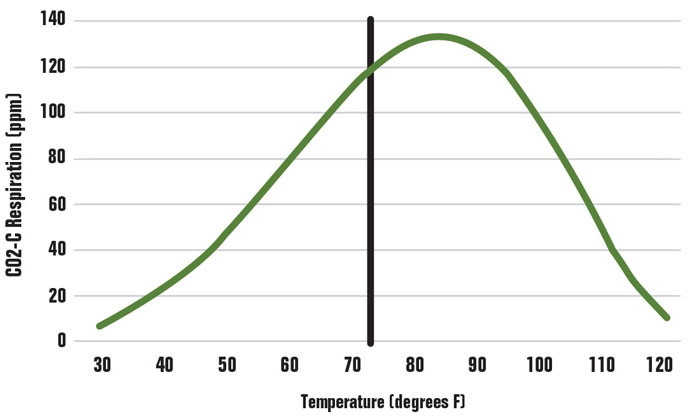 Doug Miller, vice president of Midwest Bio-Tech, discusses 10 lessons he has learned about the interaction of soil fertility and microbial activity over 40 years.

Certain lessons about microbiology can only be learned under unusual conditions, says Doug Miller. The vice president of Midwest Bio-Tech, founded in 1981, shared some of these lessons, learned over the past 4 decades, in a recent webinar hosted on www.No-TillFarmer.com.

1. Every Situation is Different

Every farm has its own situation, even farms that are near each other. Not only are the natural environments different, over time a farm is likely to make operational changes — such as changing tillage practices or rotations — that can affect biology and how the fields perform.

When changes occur, Miller recommends using the Solvita burst test, because it can show the effects of the changes sometimes within a couple of weeks of making them. The test detects how much carbon dioxide (CO2) is respired by the microbes in the soil, which in turn causes carbon to be sequestered in the soil.

“It’s a leaky process,” Miller says, “in which we measure the amount emitted rather than what’s being sequestered. Soil with high activity is a good sign and this test helps us measure that.”

The amount of moisture in soil is crucial for the soil’s biological activity levels. But if the conditions are too dry or too wet, the microbes go dormant until the situation improves.

To measure microbial activity based on moisture, Midwest Bio-Tech tested silt loam soil samples at different moisture levels. On the low end, they saturated the soil at a level that represented 20%…

Premium content is for our Digital-only and Premium subscribers. A Print-only subscription doesn't qualify. Please purchase/upgrade a subscription with the Digital product to get access to all No-Till Farmer content and archives online. Learn more about the different versions and what is included.
KEYWORDS Doug Miller microbial activity Midwest Bio-Tech soil biological activity soil organic matter Solvita burst Get Solid Answers About No-Till Soil Microbiology and Fertility Concerns

[Webinar] What Have We Learned About Managing Soil Health?