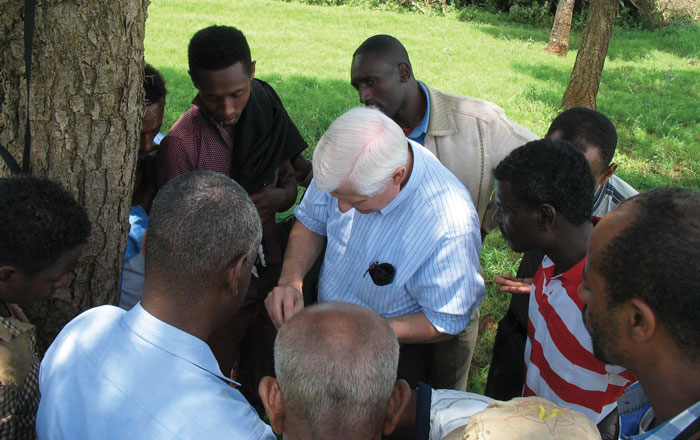 Train a Farmer, Feed a Nation

Warren Dick was studying chemistry at Wheaton College (Ill.), with plans to become a medical doctor, when he had a life-changing epiphany

“Between my junior and senior years, I went on a summer mission trip to South Sudan,” Dick says. “I saw so much poverty and hunger there. And I thought to myself ‘I’m a farm boy, I can do more good in this world in agriculture than I can in medicine.’”

Dick, who grew up on a small family farm in North Dakota with 8 brothers and 4 sisters, decided to return to his roots.

“I applied to grad school in agriculture at Iowa State and became a soil scientist,” he says. “I always thought I’d go back to Africa and start a university or training center.”

Dick retired after teaching for 36 years at Ohio State in 2016. He now serves as the president and director of the Bethel Agricultural Association, a faith based non-profit organization with the following mission statement: “To impart environmental and agricultural knowledge and skills that will enable Ethiopians and other Africans to protect their environment and practice sustainable agriculture.”

The Wooster, Ohio native recently returned from Woliso, Ethiopia, where his team is building the Bethel Environmental and Agricultural University and Training Center, focused “primarily on environmental stewardship and agricultural productivity that will serve the people of Ethiopia and other parts of Africa,” he says.

The university plans to offer courses on…

A Trifecta of Tools to Improve Soil and Water Quality