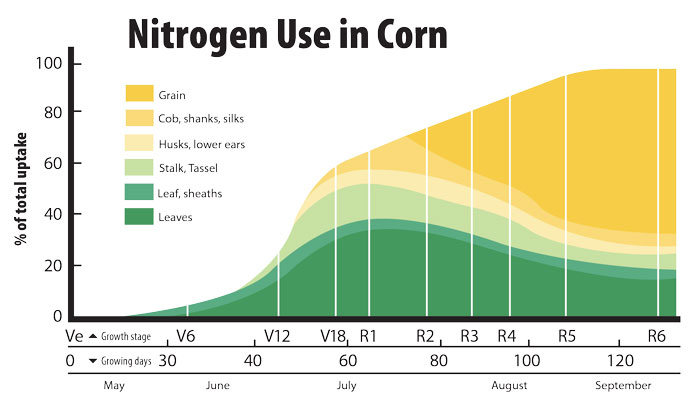 Indiana farmer reflects on twenty years of change, outlines how to maximize return on investment with N application.

Mike Starkey operates a 7th generation family farm in Brownsburg, Ind., right across the road from a K-8 school and the biggest church in the Archdiocese of Indianapolis. Farming in an urban area has some advantages, like being able to easily make it to Colts and Pacers games (Starkey is a season ticket holder). But the environment also comes with the usual challenges.

“I have to educate as best as I can the urban neighbors (about airplanes dropping cover crop seeds),” Starkey says. “I plan around the traffic. I don’t dare move the equipment between 6 and 8 a.m., or after 4 p.m., or when the kids get out of school at 2:30 p.m.”

Starkey Farms stretches over 2,500 acres in Hendricks and Boone Counties, where the family raises corn, soybeans, wheat, hay and beef cattle. As a no-tiller, Starkey’s ability to adapt and embrace change is critical to the operation.

“You’ve got to learn from your mistakes, which I’ve done quite a bit. And, if that opportunity exists, make the change.”

Zeroing in on Nutrients

“Now anytime retailers sell nitrogen they always recommend Thio-sul,” Starkey says. “Times have changed. They realize our soils are so short of sulfur. If you’re not putting…

Premium content is for our Digital-only and Premium subscribers. A Print-only subscription doesn't qualify. Please purchase/upgrade a subscription with the Digital product to get access to all No-Till Farmer content and archives online. Learn more about the different versions and what is included.
KEYWORDS cover crops fertilizer Nitrogen Nitrogen application nutrient management

Getting The Most Out Of Nitrogen

Get The Most From Foliar Feeding Corn And Soybeans