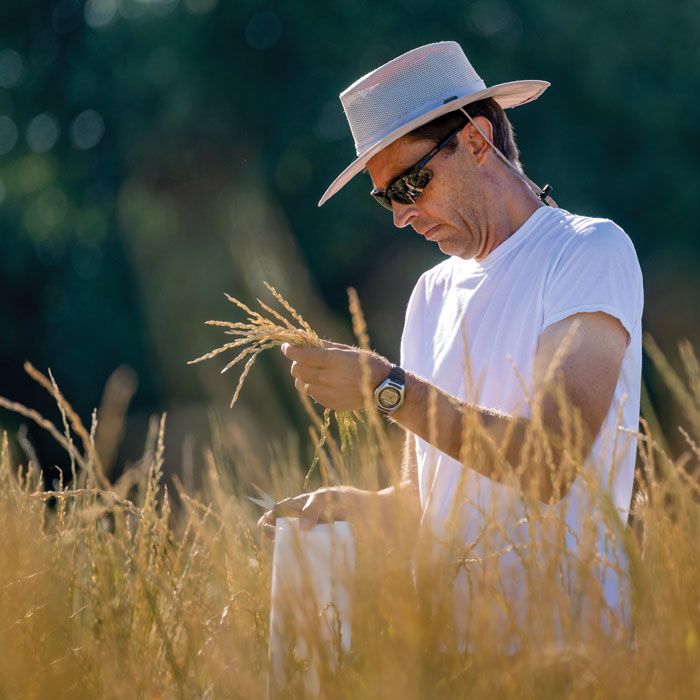 Kernza, a specialty grain crop developed by The Land Institute, is a perennial cool-season, dual-purpose crop that can provide high-quality winter grazing as well as grain in the summer.

The land institute's nearly 20-year-old breeding program with intermediate wheatgrass is on track to perfect a no-tiller’s “dream come true” — a cool season perennial that can be managed for both winter grazing and a grain crop the following summer.

Kernza, the Institute’s first perennial crop introduced into agriculture and food markets, is the product of plant biologist Lee DeHaan’s selections of the intermediate wheatgrass, Thinopyrum intermedium, a perennial grass native to Russia, Afghanistan and Turkey. Since 2003, DeHaan has been selecting for increased yield, seed size, disease resistance and other factors that would make the grass an economically viable crop.

The word Kernza — an amalgamation of  “kernel” and “Konza,” in recognition of the Konza Prairie Biological Station in Kansas — was trademarked by the Land Institute in 2009 by the Salina, Kansas-based non-profit. The new perennial wheatgrass represents the first fruits of DeHaan’s breeding efforts with material originally imported in 1930 by the USDA, and selected and developed by the Rodale Institute between 1983-2001.

About 4,000 acres of Kernza are grown in Montana and the Upper Midwest and as far south as Nebraska and Kansas. More than 50 growers use the crop for forage production and harvest grain for a fledgling market that includes General Mills and Patagonia Provisions, as well as artisan grain outlets, restaurants and craft brewers.

Premium content is for our Digital-only and Premium subscribers. A Print-only subscription doesn't qualify. Please purchase/upgrade a subscription with the Digital product to get access to all No-Till Farmer content and archives online. Learn more about the different versions and what is included.
KEYWORDS intermediate wheatgrass Kernza Lee DeHaan perennial grain crop Tessa Peters The Land Institute

[Podcast] Plant Once, Harvest for Years with Perennial Kernza