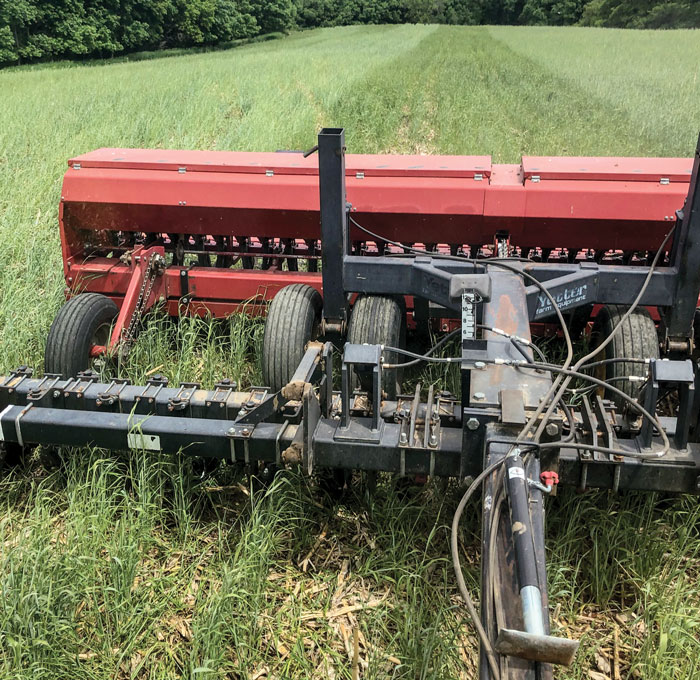 Growing Food for Crops and Cows with Covers

About 8 years ago, when Ben Dwire learned that no-tilling required less equipment and labor, and could make planting crops as easy as pulling into the field and getting started, he started questioning conventional methods. Dwire and his wife, Kristi, who farm 550 acres near Arco, Minn., turned to Kristi’s father, who no-tills in north central South Dakota, for advice.

“We had been borrowing a lot of equipment from my dad and brother, who farm nearby,” says Dwire. “As we started buying more of our own equipment, we decided to bite the bullet and go into no-till.”

It took Dwire 2 years to fully transition to no-till.

He was the first in his family to no-till. His brother switched to no-till in 2019, and his father now no-tills half of his acres after seeing Dwire’s success.

Dwire’s crop rotation includes seeding cover crops on two-thirds of his acres every year. Oats are typically seeded in early April at 3.25-3.5 bushels per acre, for a final stand of 1.3 million plants per acre. They’re interseeded with a red clover cover crop mix to build nitrogen (N) for the next cash crop and to graze his 30 pairs of Red…

Premium content is for our Digital-only and Premium subscribers. A Print-only subscription doesn't qualify. Please purchase/upgrade a subscription with the Digital product to get access to all No-Till Farmer content and archives online. Learn more about the different versions and what is included.
KEYWORDS Conserve moisture Economics Exclusive no-till Homegrown fertilizer Suppress weeds