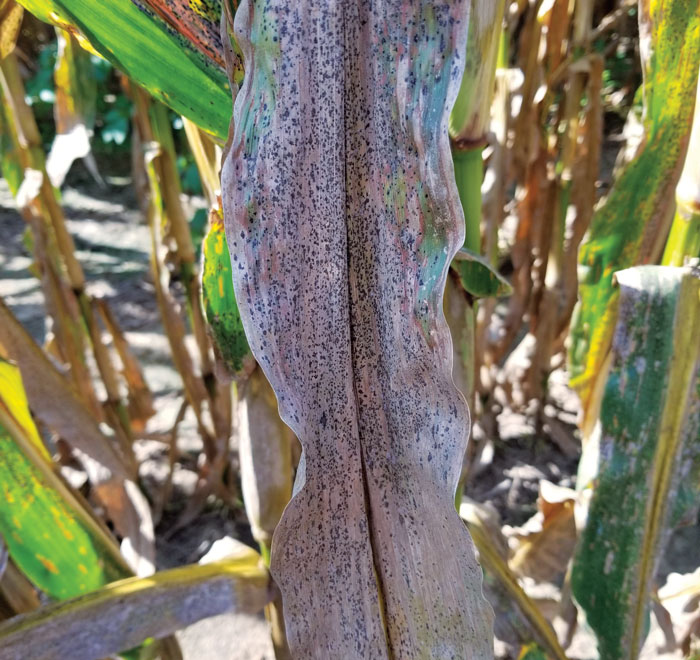 By Dan Crummett posted on January 5, 2022 | Posted in Crop Protection

While seed choices are limited, plant pathologists urge growers to attempt to select hybrids for tar spot resistance and be ready to make fungicide applications at the first sign of the disease in their fields.

Corn producers in a growing number of states are preparing for a fight with tar spot, a fast-spreading, elusive fungal disease capable of devastating yield losses

Infestations of the fungus Phyllachora maydis, which originated in Central and South America, have spread quickly since first discovered in 2015 in 7 counties of northwest Indiana and 10 counties in north-central Illinois. In 2018 the disease began cutting yields in Indiana and other states as it continued to spread rapidly to surrounding states. Today it is present with confirmed or probable cases in 14 U.S. states and fields in Ontario, Canada.

“For a disease which only turned up in the U.S. in 2015, it has spread remarkably fast,” says Steve Goodwin, USDA-ARS plant pathologist in West Lafayette, Ind. “I heard recently Iowa is the first state in the country to report it in all of its counties.

“Because of the original outbreak being near to the Great Lakes, everyone thought it would be limited to the cooler regions there, but that was wrong,” Goodwin says. “According to university Extension plant pathologists across the affected regions, the main driver is moisture rather than temperature. Infections have not been as severe in droughty areas, but are seen in beautiful-looking corn that hasn’t suffered from any other problems. And then it can come in hard and fast.”