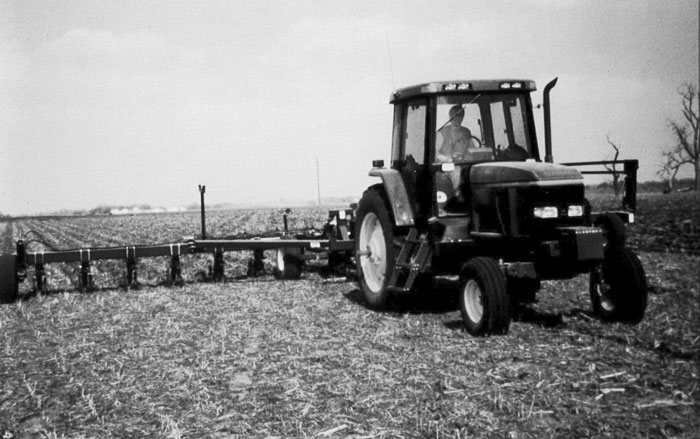 The “Grandfather” of Strip-Till Talks Transition and Technique

Illinois farmer Rich Follmer reflects on how a desire to warm the soil while still maintaining his conservation efforts led to the invention of strip-tilling and shares what methods are working on his farm today.

Rich Follmer didn’t set out to become a businessman. In the 1980s, the corn and soybean farmer from central Illinois — considered by many to be the “grandfather” of strip-till — designed and built a system that would allow him to till the ground and plant soybeans simultaneously.

That innovation caught his neighbors’ attention and led to the founding of his company, Progressive Farm Products. A few years later, a friend approached Follmer to discuss frustrations with low yields from no-till compared to his conventionally tilled acres.

He wanted to find a solution that would warm the ground and dry it out enough to plant, while still maintaining his conservation efforts across his 2,500-acre operation in Hudson, Ill. Follmer came up with a solution — a piece of equipment that would till the ground in 8-10-inch-wide rows, while leaving the rest of the surrounding ground undisturbed. Before long, he dubbed this new farming method strip-tilling, and the rest, as they say, is history.

“We built a homemade 12-row bar with some crude row units at first to kind of clear a path in the field. We went into actual production in 1992, and we thought maybe we hit a home run with the system,” Follmer says. “We had to figure out what to call it, and the only thing we could think of was strip-till.”

Recently Follmer, who invented the midmount, dual-placement strip-till toolbar that is being used by thousands of Corn Belt farmers, sat down with Editor Frank Lessiter…

Premium content is for our Digital-only and Premium subscribers. A Print-only subscription doesn't qualify. Please purchase/upgrade a subscription with the Digital product to get access to all No-Till Farmer content and archives online. Learn more about the different versions and what is included.
KEYWORDS residue management Rich Follmer spring vs. fall strip-till strip-till savings strip-till toolbar

Bill Richards — The Grandfather Of No-Till

[Podcast] One-on-One with the Grandfather of No-Till, Bill Richards

Not Your Grandfather’s No-Tiller: Rethinking the Farm of the Future