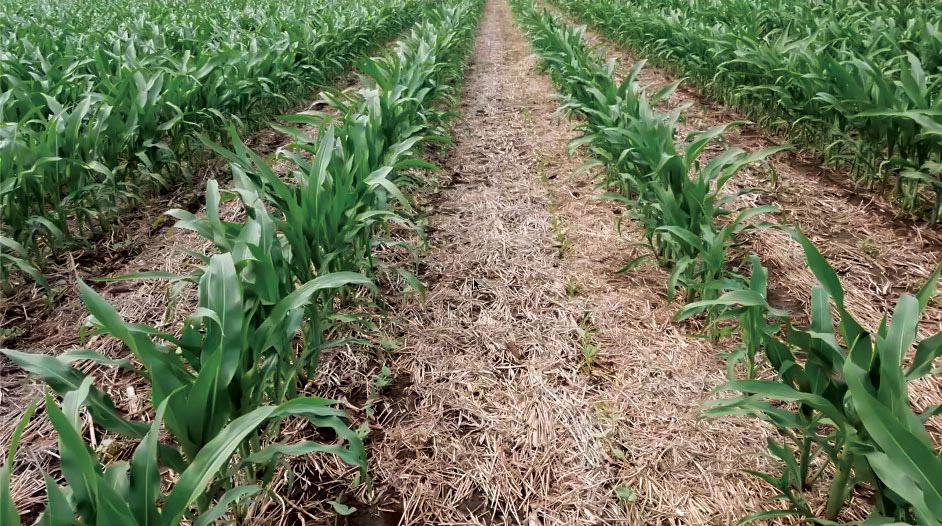 By John Dobberstein posted on May 27, 2021 | Posted in Seeding & Planting, Soil Health

Utilizing on-farm research, the Shenandoah, Iowa, grower leaves no stone unturned in his quest to get beyond the basics and boost biomass production and soil health.

Pictured Above: WIDENING OUT. In his experiments with 60-inch rows for no-tilled corn, Chris Teachout logged a slight yield loss for corn but measured higher amounts of above ground nitrogen and biomass in the wider rows when compared to 30-inch rows.

SINCE THE 1980s, Chris Teachout and his family have been using conservation practices on their farm, and the operation has been no-tilled for the last two decades.

Just implementing no-till alone is not easy. But Teachout hasn’t rested on his laurels, as he’s been trying new practices to enhance production and profitability beyond just maintaining a basic rotation of corn, soybeans and small grains.

Teachout says getting out of a rut with no-till requires a willingness to look at problems a different way. He is a licensed helicopter pilot and often talks about the training and thought process pilots use to analyze and fix problems rather than focusing on the danger of the moment.

When growers are faced with a challenge, “we tend to go right towards that problem. We want to focus on the solutions for the problem.”

Teachout understands the value of having a full armor of residue on top of his soils. He accomplished this by first no-tilling soybeans into cereal rye, then interseeding cover crops into corn to improve biodiversity.

One payoff to keeping soils covered has been mitigating extreme soil temperatures, allowing him to eke out productive crops when they might have otherwise burned up.

One year he stuck a…