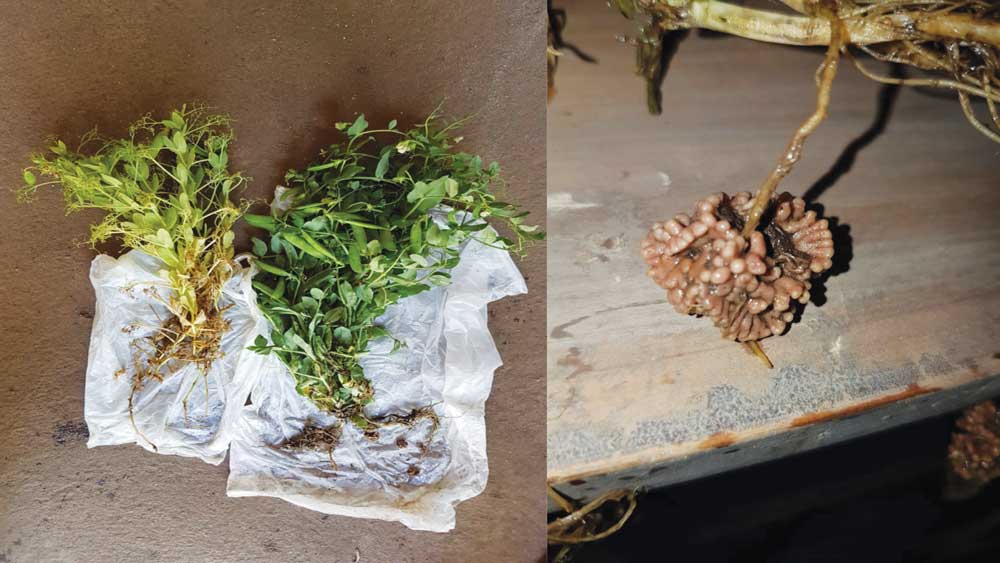 The veteran South American no-tiller and consultant shares insights on measuring the contributions cover crops make to the soil, and advice for managing the complex interactions that are a hallmark of healthy, productive soils.

Pictured Above: INOCULANTS MATTER. When Argentinian no-tiller Roberto Peiretti tested a new legume inoculant, he learned that the traditional one he had been using was sub-standard. The field peas on the left, which were treated with the traditional inoculant had virtually no nodulation on the roots, whereas the new inoculant produced a massive amount of healthy, pink nodules

When it comes to confirming the benefits of a dynamic no-till system, Roberto Peiretti has had the benefit of 40 years of experience honing his approach in Argentina, Brazil, Paraguay and Uruguay.

A founding member of the Argentinian no-till farmers association, AAPRESID, Peiretti says cover crops are an important part of his system.

“Farming realities and facts have convinced me that including and intensifying the use of cover crops in a no-till system significantly improves agroecosystem functioning and farming results — not only in the short term but also for the medium and long range.”

While he stresses the “recipe” for no-till and cover crop success may be different from one from to the next, Peiretti says there are several principles that help lead to maximizing their use.

1. Follow the three essential pillars of a no-till system:

2. Learn to understand the synergies between carbon and soil physical, chemical and biological characteristics. “Carbon is the frame and the fuel of every living thing,” Peiretti says, adding that…

Premium content is for our Digital-only and Premium subscribers. A Print-only subscription doesn't qualify. Please purchase/upgrade a subscription with the Digital product to get access to all No-Till Farmer content and archives online. Learn more about the different versions and what is included.
KEYWORDS avena strigosa black oats cover crops no-till in South America Roberto Peiretti

A Fertile Place For No-Till Tips