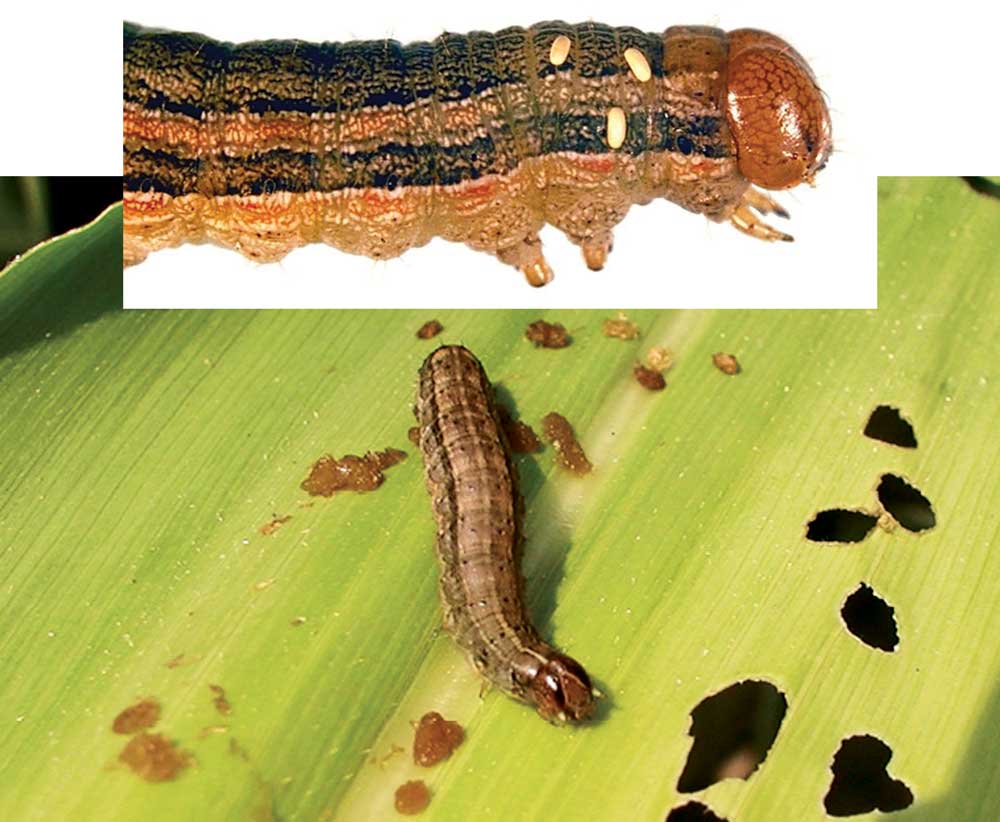 By Dan Crummett posted on January 2, 2021 | Posted in Crop Protection

Pictured Above: LARVAL LOOKALIKES. While the two larvae look very similar, the characteristic inverted “V” or “Y” on the head of the fall armyworm (bottom) sets it apart from the true armyworm (top). Both species primarily feed on other crops but can do significant damage to corn if the circumstances are favorable. The small white ovals on the true armyworm are the eggs of parasitic wasps or flies and could be a cue that treatment isn’t needed

The so-called “true armyworm” is one of the more frustrating early-season pests no-till corn growers encounter periodically, particularly if they are planting into small-grain or other grassy cover crops, or in fields near sources of grassy weeds.

The springtime pest should not be confused with the “fall armyworm,” another corn insect species which can become a problem later in the season, usually on late-planted fields. While neither pest usually causes widespread geographic damage to corn, localized areas can be devastated as they move from their grassy host plants into corn fields.

Ohio State University entomologists say true armyworm moths overwinter and then migrate northward from the southern U.S. and Gulf Coast in April and May — easily reaching Midwestern and northern corn-growing areas. While the pest does not overwinter in the more harsh winter climates of the northern U.S., annual migrations of moths are present each year.

The true armyworm (Pseudaletia unipuncta) attacks grass crops like cereal crops and seedling and whorl-stage corn. Entomologists say it is always associated with the presence of…

Premium content is for our Digital-only and Premium subscribers. A Print-only subscription doesn't qualify. Please purchase/upgrade a subscription with the Digital product to get access to all No-Till Farmer content and archives online. Learn more about the different versions and what is included.
KEYWORDS canada thistle Fall Armyworm giant ragweed marestail Palmer amaranth Pseudaletia unipuncta Spodoptera frugiperda true armyworm waterhemp