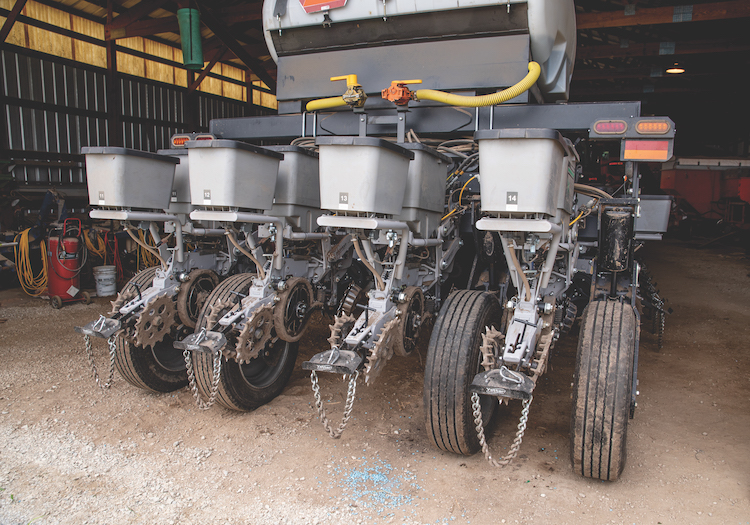 Building a Customized $350,000 Planter from the Ground Up

Seeking to ratchet up performance, Allan Brooks and a local dealer built a new machine from the “ground up” to fit the unique needs of this no-tiller’s farm.

Pictured Above: TWO MAJOR NEEDS. In designing a 24-row planter for 30-inch rows, Allan Brooks says accurate nutrient placement was an absolute must. So was effective seed singulation, which is extremely critical with several vegetable crops

Starting in 2017, the Markesan, Wis., grower of vegetables for the processing market and other crops came across several new innovations that influenced his thinking.

“It wasn’t just one thing but many, as new fertilizing and seeding innovations were coming fast,” he says. “I thought I was going to hang back for a while, but I kept gathering information on products that might work in a totally new planter package.”

As a result, he decided to build a new planter for the 2020 cropping year from the ground up while incorporating many of the latest bells and whistles. Brooks was specifically looking for innovations that would provide more accurate nutrient placement and seed spacing.

Helping Brooks manage the operation and handling most of the planting is Alex Grover. The operation includes 2,235 tillable acres, with about 150 acres double-cropped in July to green beans after harvesting early peas that were planted around April 10.

Other crops include sweet corn, snap beans, lima beans and winter wheat in a 4-5-year rotation. He also grows barley and wheat to provide seed for an…

Premium content is for our Digital-only and Premium subscribers. A Print-only subscription doesn't qualify. Please purchase/upgrade a subscription with the Digital product to get access to all No-Till Farmer content and archives online. Learn more about the different versions and what is included.
KEYWORDS Alex Grover Allan Brooks Building planter from the ground up customized planter build Harvest International Kurt Williams Precision Planting S.I. Distributing