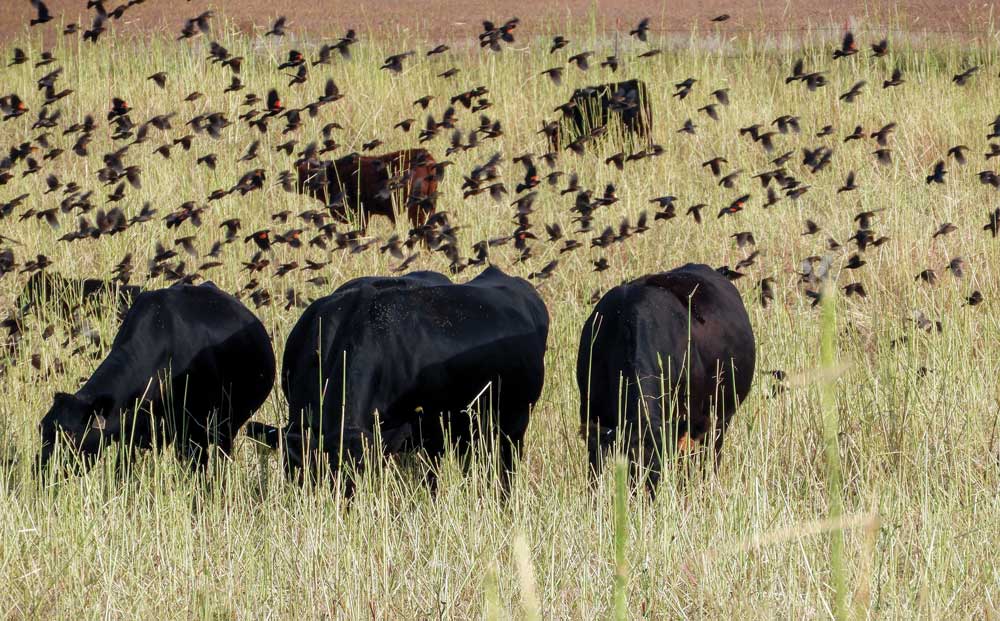 South Dakota grower Dennis Hoyle shares insights on how he’s been successful with no-till for more than 35 years and integrated cover crops and livestock into the system.

Pictured Above: DIVERSITY ON DISPLAY. Dennis Hoyle’s cattle share a field of cover crops with a flock of birds near Roscoe, S.D. Hoyle’s soil health management practices make his operation an excellent habitat for many species of birds. Photo courtesy of S.D. Soil Health Coalition

DENNIS HOYLE SAYS that a radio broadcast in 2015 changed his thinking about cover crops and cash crops.

“A guy said that farmers can buy corn cheaper than they can raise it,” he says. “Instead of doing that, I wanted to do something good for our land.”

Hoyle had been planting food plots for pheasants since 2002, which turned into a pheasant hunting business. It’s also how he got started planting cover crops, though he didn’t realize it at the time.

In addition, Hoyle operates a grass-fed beef business, using full-season cover crops as forage for his 300 head of crossbred cattle after pheasant season. The trio all complement each other in his diverse system at Roscoe, S.D.

With the vision of an entrepreneur and a regenerative farming philosophy, he’s had great success with building up the land and wildlife while making a living.

Hoyle’s operation is a family business. His daughter, Ruth, and her husband, Kelly, own some cows in the herd and come help every summer when they’re on summer break from teaching. A son, Travis, helps market beef through social media, in addition to his full-time job. Hoyle’s brother, Don, is retired and helps on the farm from time to time as…

Premium content is for our Digital-only and Premium subscribers. A Print-only subscription doesn't qualify. Please purchase/upgrade a subscription with the Digital product to get access to all No-Till Farmer content and archives online. Learn more about the different versions and what is included.
KEYWORDS Cover crops Cover crops and cattle Cover crops and livestock Dennis Hoyle long-term no-till

What I've Learned From No-Tilling: When Wet Or Dry, No-Till Rotations, Covers And Cattle Are The Answer

What I've Learned From No-Tilling: Negotiating Challenges and Opportunities When Combining No-Till and Dairy