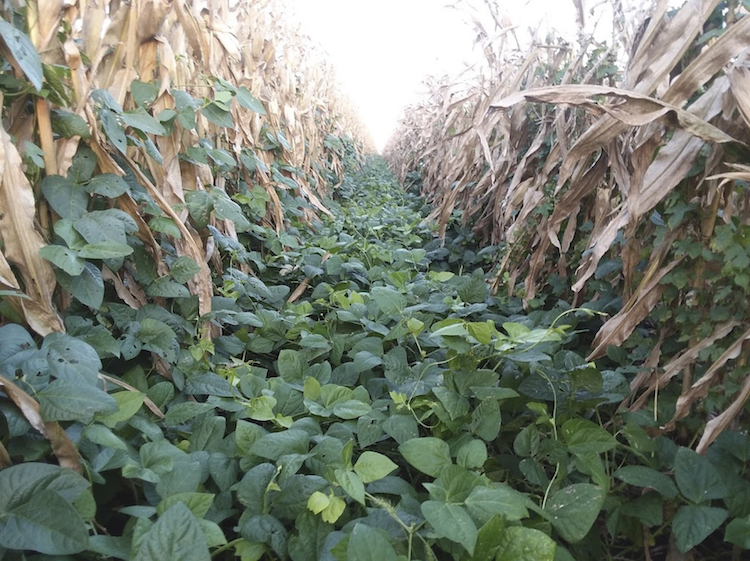 With soils that are rich in microbial life as a result of growing cover crops in a diverse crop rotation, no-tillers have the opportunity to boost their bottom lines with organic production.

Pictured Above: BIG BIOMASS. In 2019, researcher Joel Gruver of Western Illinois University compared interseeding cowpeas between 60-inch row corn vs. 30-inch corn. In the 60-inch row, there was 20% less yield overall than in the 30-inch row, but there was also five times more cover crop biomass in the 60-inch system

MANY FARMERS WHO switch to organic production start out motivated by increasing profits, says Dani Kusner.

At the 2020 National No-Tillage Conference, the agronomist for The Andersons said continued consumer demand for organic products often translates into a stronger bottom line for the farmer who’s willing to do the work. But the many benefits of organic production can compound over time, creating a healthy, dynamic ecosystem that builds soil while optimizing no-till efficiencies.

The keystone to no-till organic production is maximizing increased biomass and soil organic matter so soils are functioning at peak performance. And carbon is at the heart of the system, says Kusner, as it’s the foundation for all soil physical, chemical and biological processes and can be a limiting nutrient — just like nitrogen (N), phosphorus (P) and potassium (K).

According to Kusner, soils on organic farms support larger amounts of soil organic matter and carbon for longer periods of time than with conventionally farmed…

Premium content is for our Digital-only and Premium subscribers. A Print-only subscription doesn't qualify. Please purchase/upgrade a subscription with the Digital product to get access to all No-Till Farmer content and archives online. Learn more about the different versions and what is included.
KEYWORDS carbon cycle carbon-to-nitrogen ratio Danielle Kusner organic no-till The Andersons