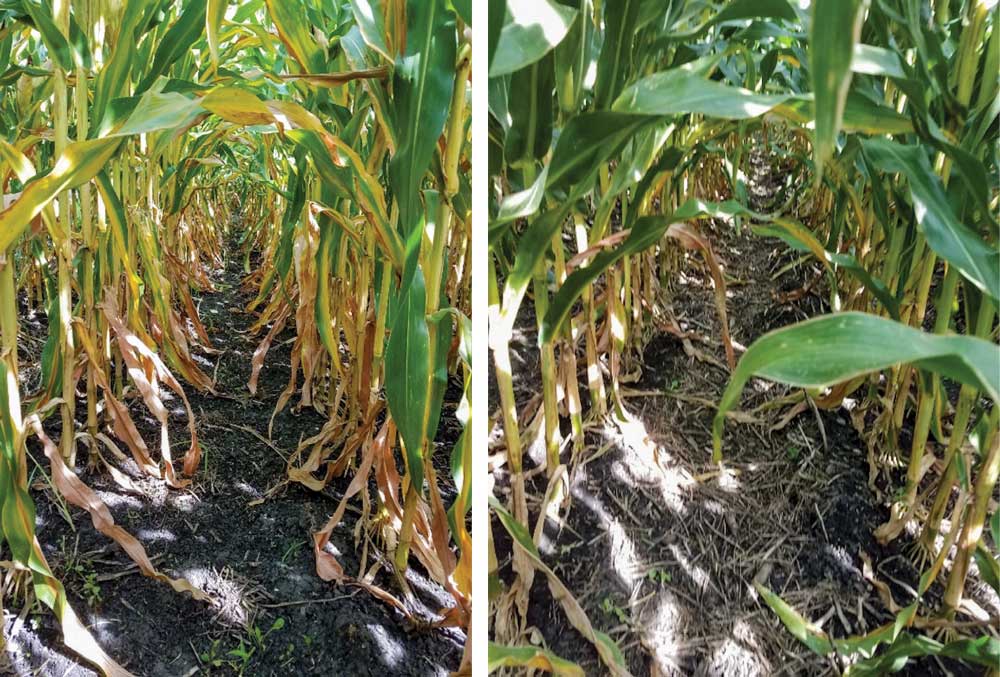 By Laura Barrera posted on November 3, 2020 | Posted in Nutrient Management

A soil scientist explains the accuracy of different nitrogen advisory tools, their limitations, and whether they’re likely to provide a return on investment.

Pictured Above: SAMPLES ARE ONLY SNAPSHOTS. A chlorophyll analysis conducted on the corn in the photos at the point of tasseling showed identical levels. But when the photos were taken on Sept. 7, it was clear the corn on the left had run out of nitrogen. It’s a reminder that when using sample-based tools like tissue tests, they’re only a snapshot in time. “[They don’t] necessarily predict what the rest of the growing season is going to look like,” says Brad Carlson, University of Minnesota soil scientist. Photo Courtesy of: Jeff Vetsch,University of Minnesota

NITROGEN (N) IS ONE of the biggest influencers on corn yield. In fact, University of Illinois plant physiologist Fred Below called it the second most important factor in his “Seven Wonders of the Corn Yield World,” ranked just behind weather.

But it can be challenging to work with. Thanks to the complex nature of the N cycle, it can change form and become inaccessible to the crop. Through the process of nitrification it converts into nitrate and is susceptible to leaching through the soil, or denitrification which results in loss to the atmosphere when the soil is saturated. Soil organic matter, moisture and temperature all impact the N cycle.

Because of this potential for N loss, some growers are turning to advisory tools to better understand how much N the crop needs throughout the growing season. At the 2020 National Strip-Tillage Conference, University of Minnesota (UMN) soil scientist Brad Carlson explained the current tools available on…

Premium content is for our Digital-only and Premium subscribers. A Print-only subscription doesn't qualify. Please purchase/upgrade a subscription with the Digital product to get access to all No-Till Farmer content and archives online. Learn more about the different versions and what is included.
KEYWORDS Brad Carlson encirca FieldView Greenseeker Nitrogen advisory tools Pre-sidedress nitrate test R7 crop modeling tool