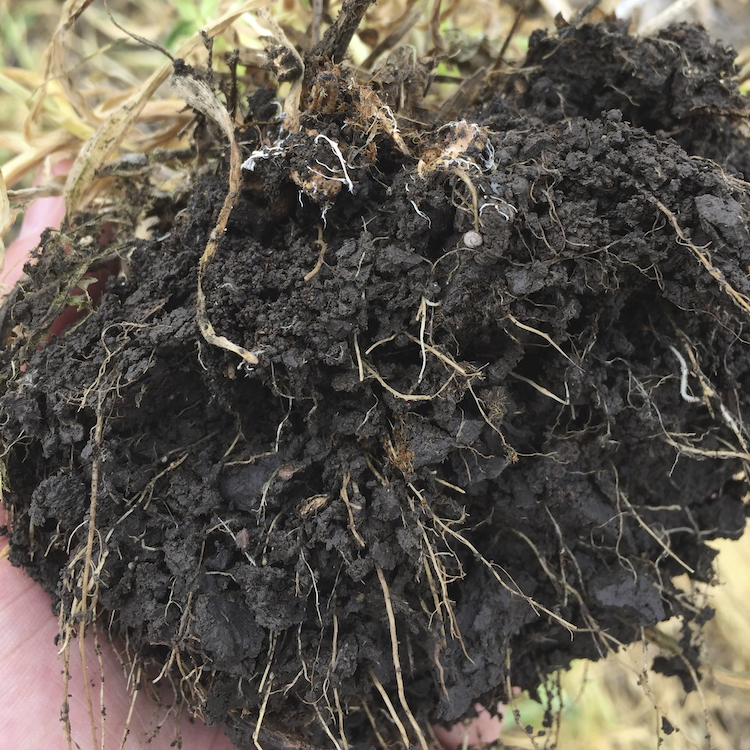 Soil compaction can limit yields, cause flooding and runoff and limit nutrient uptake in plants. But breaking up compacted soils with iron is not the answer, according to soil health consultant Jim Hoorman — biology is.

Pictured Above: PREVENTING COMPACTION. Having living roots in the ground for as long as possible is the key to preventing soil compaction, says soil health consultant Jim Hoorman of Hoorman Soil Health Services. Living roots create pore space in the soil and promote healthy macroaggregates that hold their structure

Soggy fields and heavy grain carts are a common combination in fall, and can lead to deeply rutted and compacted fields. And it’s no joke. Soil compaction can reduce yields by up to 60% and it’s been shown to persist for up to 9 years, according to Jim Hoorman.

While the weight of equipment and traffic patterns are obviously big factors in compaction, what determines the severity of compaction is soil biology, Hoorman explained at the 2020 National No-Tillage Conference. And soil biology can be improved by following the principles of soil health, which include:

Ideally, soil is composed of 50% solids and 50% pore space, says Hoorman. To be more specific, he says the solids are comprised of about 45% inorganic minerals (sand, silt and clay) and 5% organic matter and the pore space is half water (25%) and half air (25%).

Sandy soils, he says, won’t contain that much organic matter — they’re more likely to top out at 2-3% organic matter simply because “it’s a bigger particle, you’re getting oxygen in there and it’s harder to get your organic matter up.”

But, he adds, “today’s degraded…

Premium content is for our Digital-only and Premium subscribers. A Print-only subscription doesn't qualify. Please purchase/upgrade a subscription with the Digital product to get access to all No-Till Farmer content and archives online. Learn more about the different versions and what is included.
KEYWORDS biology of soil compaction cover crop roots Jim Hoorman soil organic matter

Secrets to Breaking Through the 600-Bushel Barrier with Strip-Till